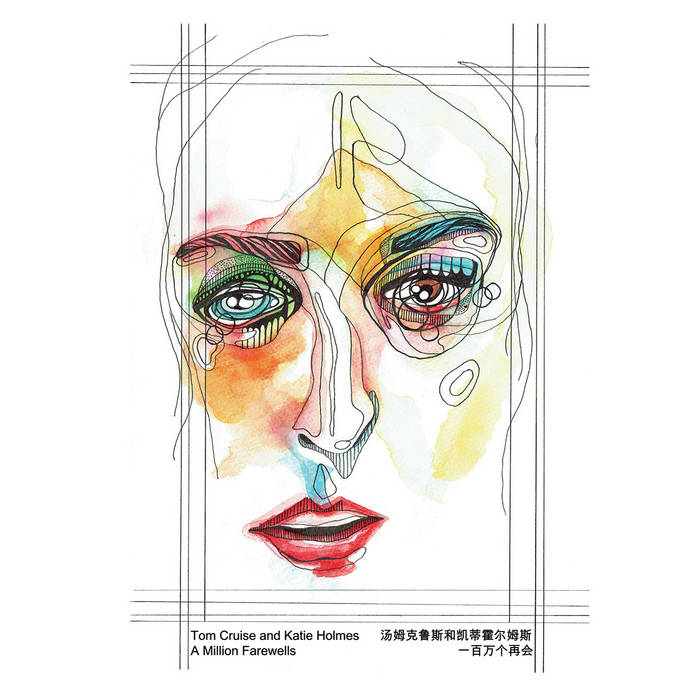 When Xiao Zhong and Sharon Cee-Q found themselves in a room together for the very first time, they agreed on a guiding philosophy: “Let’s not make anything that’s going to last. If we’re together for just two shows, then that’s what it is.” Thus was born Tom Cruise And Katie Holmes. Since then, they’ve most certainly deviated some, but not much, really.

Over the course of a year and a half, the Shanghai based museos who’d been involved (non collectively) in such lauded mainland acts as Pairs and Hua Jia Hu Wei, released their debut 7” here on Genjing, added journeyman bassist Sam Walsh and drummer Daniel Nagels to their lineup and have proceeded to lay down one of contemporary indie rock’s most exhilarating jam sessions gone right - a concise full-length chock-full of wooly, dreamy, delicate, white-knuckled shoegaze imbued modern hymns.

This autumn marks the official arrival of A Million Farewells, the band’s their first long player for Genjing Records. It is a miraculously dissonant, wonderfully immediate display of Tom & Kate at their mightiest; alive with the same wild chemistry and sense of possibility that made their first recordings so vital. With more time together than they’d ever had before (which wasn’t much), the band had found themselves confronted with ideal, yet quasi-foreign conditions. And they wouldn’t have had it any other way. Two-minute freakouts like “My Life is Over” share airspace with the meditative squall of “Sam’s Knife” and the guitar-born majesty of the title track. One can’t but notice band’s intentionally one-off brand of being exactly who they are in a pop context; everything presumably captured in (something like) three takes or less in a bleak, quasi-nondescript studio someplace deep within the damp, scabulous scrawl of modern Shanghai.

“It’s a simple thing,” Xiao Zhang says of their approach. “Simple takes the worry out of it. But we’ve grown up and been through some shit in China. To get to this point you have to bust through a few walls. It’s easy to be new, and I think, in the end, this is what it is.”

When you put the aforementioned foursome in a room, it’s Tom Cruise And Katie Holmes.

And A Million Farewells truly is what it is - quite something: a classic quasi-Sinophilic full length if there ever was one.